A Visit to Royal Oak and Rocky Ridge 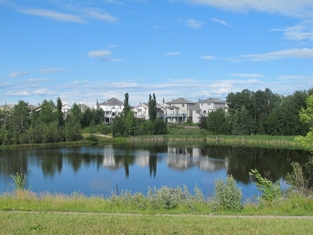 Royal Oak and Rocky Ridge communities are located in the northwest part of Calgary. They are known for their beautiful mountain views, organized pathways as well as the surrounding wetlands.

This is one of the ideal places as far as Calgary real estate is concerned. It is a great environment that is likely to make one forget the hustle and bustle associated with the city.

According to the Monique Chiasson who is the community engagement director of Rocky Oak Community Association also known as RRROCA, the scenic beauty made up of rocky mountains and wetland pond is one of the main reason why people love these communities. This is what attracts a majority of the Calgary home buyers.

Another great feature of these communities are the well-organized pathways which connect the communities. They wind through the trees and wetlands and one gets to enjoy the mountains as they pass through the pathways forgetting all about urban life.

Chiasson also pointed out the fact that the community provided a variety of housing options which are meant to cater for different needs. They include condos meant to house single families as well as townhouses and retirement residences.

RRROCA also provides voluntary membership to the residents that live in the two communities since it is a volunteer organization.

RRROCA has been expanding gradually thanks to all the work that is being done in terms of creating more awareness about issues affecting the community. They have been able to host events which had a good attendance and this just shows how positively members of the community are receiving this idea. Rocky Ridge and Royal Oak is a great place to call home thanks to the positive and caring communities it has.

There are some communities which are green oriented and they cover areas such as the wetland ponds. The Royal Oaks Schools has even been able to receive the Ducks Unlimited award because of the education program they had about the wetlands.

There is also the Echo Haven community which also strives to keep up with the green theme. The neighbourhood has enough space to accommodate 25 homes. It has preserved up to 60 percent of the natural landscape and the grid power has been reduced by up to 80 percent compared to the average home. They also harvest and make use of rainwater which helps reduce consumption of treated water by up to 72 percent.

Royal Oak and Rocky Ridge are also quite accessible when it comes to transport and commuting. This is because it is found at the Crowchild and Stoney Trail intersection. There are buses going to the area and a CTrain station is due to open in 2014 to help the residents to gain easier access to the LRT system in the city. Amenities are also readily available to the residents according to Chiasson who has been a resident for the last four years.

This community has good medical facilities, business parks, gas stations, banks, restaurants, drug stores and child care services. This is one of the reasons as to why it is expanding. This would be a good investment for any person interested in homes for sale.