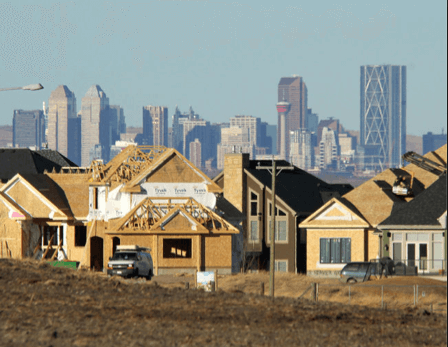 Calgary is seeing a construction boom, with new home construction being the highest in the last five years. New housing starts picked up recently, reaching record numbers in the Calgary area.

This upsurge in constructions brings a great outlook for the entire economy in the region, creating jobs and nurturing growth in other related sectors as well.

Reports show that the construction boom has occurred for the single detached homes in Calgary as well as multi-family homes. Developers also confirm this report, saying that there is an increase from 949 units in May 2012 to 1,078 units in May 2013.

The future is looking good, at least in the housing sector. Todd Hirsch, who is chief economist at ATB Financial, confirms this idea in an interview with The Calgary Herald, saying that “Alberta is really seeing an economic boom”.

Also, when compared to the energy sector, real estate in Calgary is on the rise in almost all areas.

What's even better is that the boom is continually getting stronger, according to Hirsch, as starts are almost 14 percent higher than in the previous period. This shows that there is a continuous flow of people coming from other areas of the country into Alberta.

This is fabulous news for other sectors, which will surely increase wages and lower unemployment, particularly in for the younger population. The result will be higher paid and more jobs, particularly in the housing sector. But this will also help other areas, for instance, the energy sector, which is closely related to the housing boom. The work opportunities will mean that Alberta will be an attractive destination for more years to come.

The trend shows a strong pickup even for the next summer months, after suffering a profound setback during winter. The real estate sector also brings a population increase which will surely go up across the country.

Robert Kavcic, an economist for BMO Capital Markets, confirms this idea, saying that building starts are at a 6 months high point across Canada, rising 14 percent over the last year. Even though Alberta doesn't show a huge increase, when compared to the other provinces, the gain is consistent and expected to continue.

The sharp rise, however, is expected to slow down, across the country, with prices for homes going up slower. This obviously means that there will be fewer buyers than during the boom, but the homebuilding sector will still be in good shape.

The overbuilding which was present in many provinces across Canada in the last 10 years will act as a buffer zone for the market, leaving buyers with a lot of homes to choose from. Also, according to Dina Ignjatovic, an economist at TD Economics, this will prevent overbuilding in the next years.

Alberta is expected to have a continuous rise, thanks to its great economic background and influx of people that is expected to continue in the coming years. This will lead to a steady number of houses for sale in Calgary and the surrounding areas.