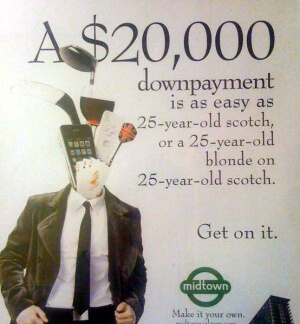 A recent condo advertisement has caused quite a commotion in the city of Calgary. Upon hitting the streets, the Point of View Developments marketing campaign for Midtown Tower condos received almost instantaneous notoriety for its tacky, sexist poster.

The image in question depicted a presumably male body in a suit. The head was replaced with a cluster of images supposedly representing dominant thoughts in a male brain - hockey stick, glass of red wine, dart, game controller, a golf club (over-sized driver), a great poker hand, and a remote.

I'm not sure what is more blatant in this ad; the portrayal of young women as "easy targets", or the single-minded depiction of the 25-year-old male. In any event, advertising is designed to attract attention, and this promotion was no exception - a public outcry ensued.

The comments were nothing short of entertaining:

Some women were shocked at the overt display of sexism.

A few understood the humour, and felt that as long as both sexes were equally belittled, then what's the harm?

Others simply said, "Lighten up, it's a joke, people".

Some men resented being portrayed as single-minded beings and expressed no desire to live in a building with the type of people who bought into this type of marketing.

Others simply implied the ad was ridiculous, because "Who would be so reckless as to waste good scotch on a 25-year-old blonde who'd rather be drinking coolers?"

One Point of View Developments had attracted an adequate amount of attention for being overtly sexist, the campaign came to an end and the company issued a public apology. According to Clark Hogan, marketing manager, "It wasn't our intention to offend anybody. We were trying to address a target audience. But obviously, we've offended 25-year-olds."

Who is kidding who, here? The ad ran its course and attracted more media attention than the Olympics. In the next few months, only the sale stats will tell us whether "there's no such thing as bad press".